You want to leave a mark. You want them to know Starling was here.

Starling’s Response:
Starling: I’ll own every bit of that one. I wasn’t about to take being kidnapped and turned into someone’s pet lying down.
Bekion: You’re not always lying down.
Starling: HUSH! 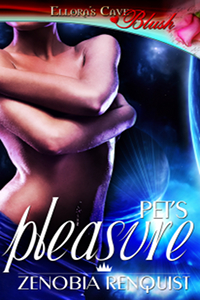 Today I am reading for Starling Moddel who is the heroine of Zenobia Renquist’s Pet’s Pleasure. This is a mainstream SciFi romance.

Renee is a military brat turned military wife who is currently stationed in Hawaii with her husband and two cats.
Whether writing as D. Renee Bagby or Zenobia Renquist, she is a world-builder. She loves inventing new cultures and shaping their histories and laws because it beats researching the existing ones.
Her stories span the fantasy gamut but she dabbles in sci-fi and contemporary from time to time. While her main characters tend to be of different races, she doesn’t let skin color rule or limit her stories. For her, it’s all about how much she can torture her characters so they earn their happily-ever-after ending.
The rules are all new and pre-conceived notions will only slow you down, so when reading Renee’s stories, she asks only one thing — Leave Your Reality Behind.

Don’t miss the contest at the end of this post. This reading was a bit unusual in that Ms. Moddel allowed others to sit in on her reading. They were far from silent. So you are getting input from three characters in this book rather than just one.

Question 1. How do you see the people around you?

Risky but opportunities for advancement. There is a bit of the snake oil saleswoman in you, Starling. You understand how to lever situations to your advantage.

This shows that you also know the good and the bad exists in everyone. I think you’ve seen your fair share of smiling faces holding backstabbing knives. I think you see people more as shills than anything else. Use them before they use you.

Starling’s Response:
Webber: Man, she’s got you dead to rights, Star.
Starling: I am not that bad. Maybe in my past when I was still living on Earth and I had a sadistic boss and backstabbing co-workers, but not anymore.
Bekion: According to whom? You were very good at using me.
Starling: THAT’S NOT WHAT SHE MEANS! Shut up, both of you.

Question 2. How are you seen by the people around you?

Wealthy in some way. Taken care of. A woman who has what other people want. Your place is one that others envy for some reason. What is that you have that everyone wants?

You might be a healer or a teacher based on this card. Others trust you. But are you trustworthy?

Starling’s Response:
Starling: Considering all that happened, this is totally right.
Webber: “Taken care of.” That’s a nice way of saying spoiled.
Bekion: I agree. As well, she has taught me a great deal about your planet Earth and the ways of loving a woman from that planet.
Starling: /blushes and whispers/ Bekion, would you please stop bringing up our private affairs?
Webber: Nothing about your affairs is private. You are a screamer and not every room you two utilize for your affairs is exactly soundproof.
Starling: I thought I told you to shut up.
Webber: /shrug/

Question 3. What is your most important goal?

To take down the Power That Be. You are here to shake things up and leave a mark on their world, aren’t you?

This is the card that is traditionally the Tower. Tower energy is about knocking down the house of lies that has been built. You seem to be a bit of an anarchist or rebel.

You want to leave a mark. You want them to know Starling was here. Lightning

Starling’s Response:
Starling: I’ll own every bit of that one. I wasn’t about to take being kidnapped and turned into someone’s pet lying down.
Bekion: You’re not always lying down.
Starling: HUSH!

Question 4. Where do you get your strength from?

Um wow. Just wow. Tower and the Death? That’s a mighty big combination, dear. Change is the key piece of this card. Whenever it comes up, I remind my client (you in this case), that change is inevitable. And this constant change is actually something good for you. You are able to grow from it.

I’m almost seeing you standing in the middle of a storm screaming in defiance. Strength comes to you when you need it the very most and think it is the least attainable. Death

Starling’s Response:
Starling: I don’t know about all that.
Bekion: Now it’s your turn to be quiet. She’s described you perfectly. /kisses Starling’s hand/ You are strong and you have adapted beautifully to everything that has happened to you. Be proud of all that you have accomplished and survived.
Webber: You want me to leave you two alone? /grins at Starling’s evil look/ I’m kidding. Take a joke. The big guy’s right, though. She described you to a T. Stop being so modest about it and accept the compliment.

Question 5.Why do you want to be remembered?

As someone who found their way without losing their integrity. You have a strong mind and an even stronger will. Your key theme in this life seems to be “I’ll do it myself.”

The moment someone offers you help, you don’t trust them. I think maybe you could let them at least hold the map for you. 7 of Air

Starling’s Response:
Starling: Yup, that’s me.
Webber: Totally agree.
Bekion: I do as well. Though she has been known to let me…
Starling: /muffles the rest of Bekion’s comment/ I swear I am never bringing you two to another interview ever again. I said it’s me. Leave it at that.

Here is an excerpt guaranteed to sizzle.

Zenobia is giving away a copy of PET’S PLEASURE. How can you win? Leave a meaningful comment for her about this reading or her book. She will pick a winner from those so leave your email so she can find you if you are the winner.

Need this book now? You can buy it here from Ellora’s Cave.

Want to learn how to use Tarot for your writing? Take my June class. It’s online and has limited seating.